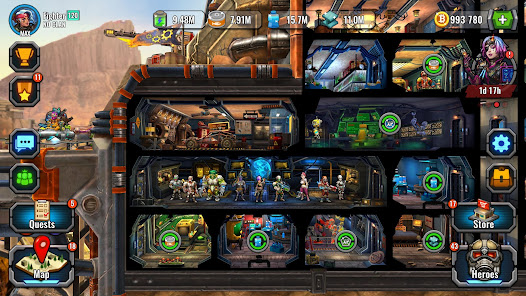 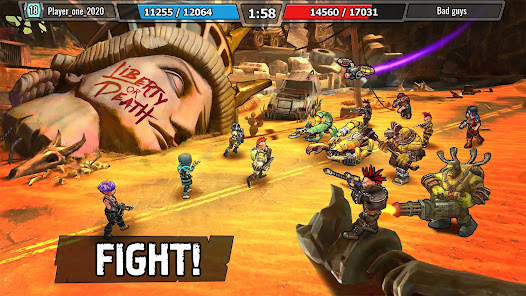 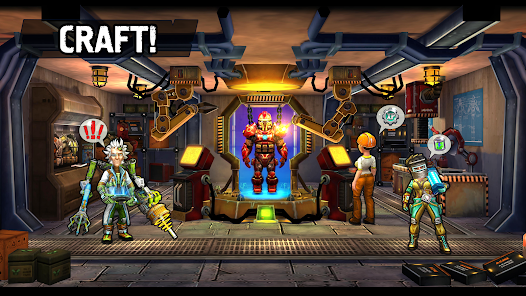 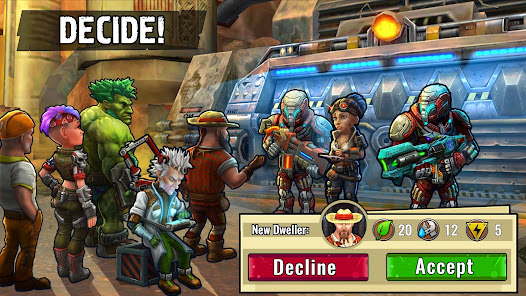 Shelter War: Zombie Games: Become the ultimate Overseer and protect your bunker dwellers from an apocalyptic Wasteland in one of the last underground shelters in the post-apocalyptic world!

Shelter War: Survival Games is an immersive survival strategy game with RPG elements. You will take on the role of a newly appointed bunker Overseer. The story takes place in one of the last shelters in America, and it's up to you to build the biggest and most prosperous bunker for all of your residents. Lead your survivors to a better tomorrow!

[WHAT IF THE APOCALYPSE CAME TOMORROW?]
Raiders and cyborgs. Zombies and mutants. Evil knights and crazy killer robots. These are the creatures you must deal with to build a prosperous underground ark and protect the last remnants of modern civilization. In a world suffering from a murderous radioactive fallout, building the safest ark possible is your one true destiny.

[ROLL UP YOUR SLEEVES!]
Shelter War is not your typical vault-building game or resource-management simulator. With its unique mechanics, good looks and graphic violence (not too graphic though!), you’ll immerse yourself into a world of never-ending wars for survival and resources. Hustle up! It's time for your soldiers to construct the most legendary base of operations, then jump out of their vault suits and finally enter the world of nuclear fallout! Welcome to the Wastelands! Enjoy being on the warpath against everything and everyone!

[TAKE CONTROL OF YOUR PEOPLE!]
Shelter War: Survival Games is a shelter life simulator with strong RPG elements. Manage resources, craft equipment and claim rewards. Enjoy hilarious narrative and role play the way you like! Survival has never been as entertaining!

[EXPLORE THE WASTELAND!]
Control and observe the borderland areas of your Shelter. Witness America in a way you've never seen before… filled with mutants scheming against humanity! Build your impenetrable castle from the ground up and take part in shelter wars.

[FIGHT LIKE YOU’VE NEVER FOUGHT BEFORE!]
You’re on the warpath. Shelter War: Survival Games is also a war simulator. Ensure your victory over countless enemies in battles that require strategy and planning! This time it's more than just another zombie apocalypse. This time you must fulfil your destiny to become the greatest hero in the last dayz of the world… or die trying!

[FEATURING:]
– Start from zero and become a hero! Lead the survivors during the apocalypse;
– Turn your humble hideout into an impenetrable castle bunker (or even an entire underground city!) by using clever urban planning;
– Explore your vault from a first-person or third-person perspective and complete unique underground quests!
– Train your shelter dwellers, whether they’re military personnel or not!
– Craft thousands of unique items and upgrade each of your soldiers! Use strategic thinking to outsmart your enemies in RPG-inspired battles;
– Join or create a clan of your own! Remember: don't fall out with your allies!
– Enjoy a complex and elaborate story with lots of twists and turns (rest assured, there'll be zombies!).
– Face the strongest enemies in a role play story mode or use strategy in Clan Wars co-op missions;
– Build your population from zero to many by using outstanding bioprinter equipment!
– Tons of combat equipment: from twin knives to portable RPG launchers!
– Enter the Collider and experience your first truly unforgettable time-travel adventure!
– Assemble your strongest warriors under the Doom Dome!
– And don’t forget to have fun, zombie fans!

EVENTS:
Hill Bill rubbed mutagen in his pumpkins to rub his harvest in everyone's faces at the Halloween annual feast! It's up to you to stop the living mutant pumpkins from flooding the entire Wasteland!
WHAT'S NEW:
- Added reward previews in the unfinished locations!
- Added new resources: Worker's genome and Fighter's genome!
- Added notifications for new free tries in various activities!
Installing games and programs Installing games with a cache How to make a screenshot
Safe to Download